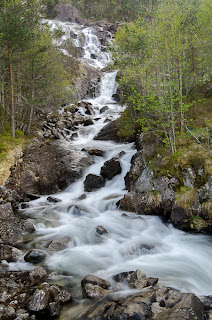 She speaks without words
in a  language all her own,
using native inflection
and subtle undertone.

As quiet drips turn rivulets
to build to steady stream,
and crash in throes against the rocks
to join with sea again--

we hear her voice increase in pitch,
with fevered timbre, modulate,
while newest off-spring gather round
to echo song; to resonate.

And just as the crescendo breaks
we come to understand this thing:
this aria, this symphony
bears witness to the birth of Spring.

Sharing at d'Verse Poets Open Link Night Week #89.
Heard the "peepers" as I left work last night, a sure sign of season's change!
Happy Spring, y'all!! 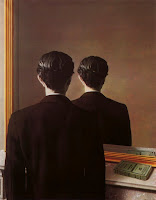 For better or worse
I’ve chosen my own path, and
you'd best deal with it

Written for The Mag #161.
Image provided by Tess Kincaid, she provides the image, we the story!
*Image: Not to be Reproduced, 1937 by the Belgian surrealist René Magritte
Posted by Ginny Brannan at 12:08 PM 13 comments:

Email ThisBlogThis!Share to TwitterShare to FacebookShare to Pinterest
Labels: Introspection 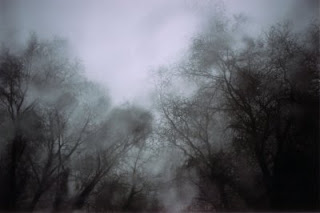 To view the light through shrouded veil
while all around dark shadows fall,
and struggle on to no avail--
embittered, broken by the squall.

There is no freedom, no parole
entrapped by all your lies and schemes.
You’d rip one’s heart and burn their soul,
and finally dissipate their dreams.

Few words are said, but actions speak
with contradiction, no remorse;
the constant struggle leaves one weak,
and laboring to stay the course.

Disarmed by masterful disguise,
you shrewdly stole all self-esteem--
much too late I realize
that you would kill the dream I dream.

Email ThisBlogThis!Share to TwitterShare to FacebookShare to Pinterest
Labels: DarkSide

There’s magic to be found
for those with open minds,
mysteries abound
that go unseen by human eyes;
tales of old still told—
secrets passed from kin to kin,
that blatant non-believers
will attempt to criticize.
“Fairy Tales” they whisper, just
in case someone should hear
for if such creatures manifest
has never proven clear.
Dancing on the fringes
of our reality,
perhaps such creatures do exist…
perhaps they’re fantasy

Sharing at The Mag #160.  Image provided by Tess Kincaid.
She provides the image, we the story!

Email ThisBlogThis!Share to TwitterShare to FacebookShare to Pinterest
Labels: Folklore, For Fun, Prompted

A Lot of Blarney 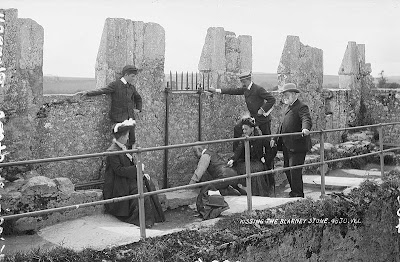 
The Blarney Stone (Irish: Cloch na Blarnan) is a block of bluestone built into the battlements of Blarney Castle, Blarney, about 8 kilometres (5 mi) from Cork, Ireland. According to legend, kissing the stone endows the kisser with the gift of great eloquence.

Who wouldn't want to visit the famous Blarney Castle?!! Kissing the Blarney Stone was a must on our first trip to Ireland in 2001. A gray day it was when we climbed the 127 uneven steps to the top of the battlements. 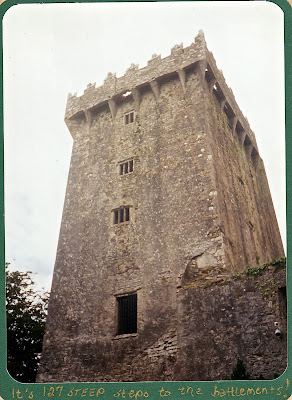 (If you scan up from the doorway past the three windows, you will see a hole, that is actually what one leans over to kiss the stone!) 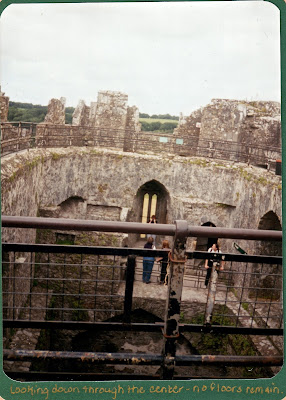 At the top of the castle lies a narrow path around the battlements. The wooden floors that once graced the castle rotted centuries ago and are long gone. Now one looks straight down through the center several stories.  A fun walk for someone who fears heights--like me--but nothing was going to prevent me from kissing the stone, after all, I might never visit Ireland again! 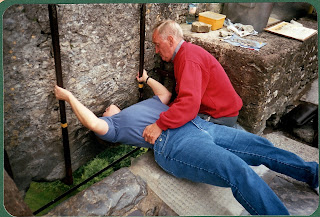 ... here I am, braving the heights and laying backwards in less-than-graceful position, so that I may procure my gift of fine eloquence!!

**By the way, for those who might not brave the steep climb, 'tis said if one kisses someone who has kissed the stone, then they too will receive the fine gift of eloquence!!

Sharing at d'Verse Poetics: It's not easy being green, and also Poetic 3/17/13
Addendum for d'Verse:
So tis ‘green’ they’d be wantin’ at d’Verse
and it seems that this’ll be me curse:
that I saw a bit too late
now am livin’ with me fate
that I didn’t check Poetics out first!