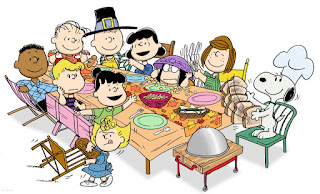 We come together each November—and occasionally between— a group of transplants who have found themselves away from the families and places we were raised who have landed together in this small New England town. Some of us have known each other for decades, others not so long. Some have children close in age that go to school together, others are extended family. We are bound by similar values, work ethics, our love of family, and the friendship that we share.

We are college professors, career military, civil servants, healthcare workers, moms, dads, grandparents, children, grandchildren, and friends. We have come from places near and far: from Texas and Oklahoma, New York, and Vermont, a U.S. territory, and a country to our south.  We have crossed state lines, borders, and oceans to arrive here. We are an eclectic mix—Polish and Italian, Irish, Scots, and Scandinavian, Mexican and Puerto Rican, whose families settled here in this country for reasons as diverse as we are—to escape fascism and oppression, to educate and further themselves, to integrate and become a part of this great melting pot called the United Sates; where dreams are possible, differences welcomed, hard work rewarded, and there is freedom to grow and become whomever one believes they can be.

We all bring something different to the table, both literally: turkey with all the fixings, pernil, yellow rice and beans, tamales, Jamoncillo de Leche, pumpkin and apple pies and other deserts; and idealistically with different viewpoints and traditions. The diversity of our backgrounds may have shaped us, but it is our commonalities that bind us; and our mutual respect, fondness and love for each other that makes us family.

(Think about it: we are all from "someplace else," we are all 'immigrants.' Even the indigenous people, the “Native Americans,” crossed by a land bridge that existed between Siberia and Alaska long before the first Europeans “discovered” this country.)
Posted by Ginny Brannan at 12:32 PM 2 comments:

In The Same Basket 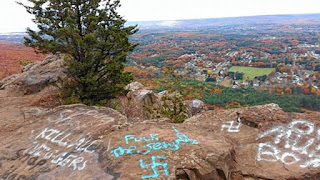 Deep inside the anger rises
Each one standing by their choice,
Perpetrating bad behavior
Letting violence have a voice.
Oh, where have all the sane folk gone?
Rebelling when we disagree…
All of us must work together,
Become the change we want to see.
Let the flames of love unite us;
Erase the hate to make us free.

The image is Hate graffiti, discovered on Mt. Tom in nearby Holyoke, MA during the week of the presidential election of 2016.
Posted by Ginny Brannan at 8:00 PM 3 comments: 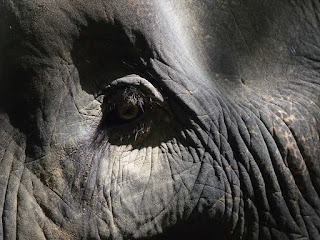 these weathered pachyderms have come,
unseen forces beckoning.
All seem to find their way here…
ivory long faded yellow,
gray turns white,
dermis folded, sagging.
They walk the walk of the ancients;
all who came before,
those who will come after.
Another rite of passage
among so many they have borne
It’s said they never “forget,”
but memory is subjective:
lost somewhere beyond
hidden plaques and tangles
their lives unravel—
and so they travel this road,
hoping for peace at journey’s end. 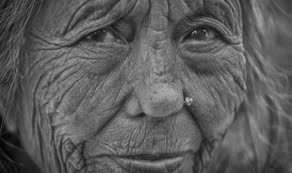 *Plaques and tangles are part of the Alzheimer's puzzle.
Posted by Ginny Brannan at 11:50 AM No comments: