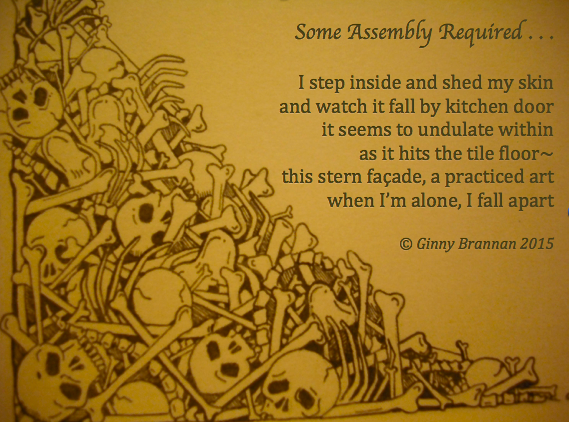 Somewhere …
between the here and there;
between a rock and a hard place
between midnight and four a.m.

I slip into limbo while you
balance the brink of extinction.
Tied inside this surreal reality
is a game where the winner takes all
or at least gets to walk away.
I navigate the sea of good intentions
bearing the burden of your pain…
and I lay awake at night wondering
if things might ever be ‘normal’ again

Email ThisBlogThis!Share to TwitterShare to FacebookShare to Pinterest
Labels: FreeVerse

There was a time when she ensconced
inside of youth’s naïveté…
the truth was surely understood—
she ultimately knew the cost,
but she stood strong—ignored the loss.

In her head she chose to see
her life as no one ever would;
she would not be classified
as someone without family
nor circumscribed by childhood.

A family may take many forms,
and blood does not a kinship make:
accepting who a person is—
with love and warmth that isn’t faked,
forms bond that will not break

She showed up at their door one day
never seeking out their help
They spoke awhile among themselves,
and like some lost or homeless stray
they invited her to stay.


We step out softly to the night
our footfalls sharp upon the stone
the dampness chills us to the bone
we turn our collars to the bite.

Our voices break against the drone
of rhythmic rainfalls' steady beat,
we sidestep puddles in the street
while slowly making way through town.

Felt on the breeze, a tease of warmth
we hope will loosen winter’s grasp,
it calls the colors to unmask…
for in the showers, spring is born.

And walking village streets in rain,
we embrace the season’s change.

Sharing for Magpie Tales #263. Image provided by Tess Kincaid.
Posted by Ginny Brannan at 11:36 AM 4 comments: