They all were "somebody's" 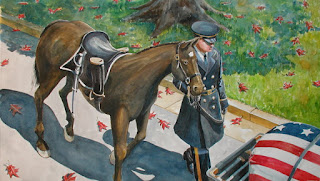 The lead ball burned through wool and skin
and tore through femur like a rocket—
the man in blue dropped to the ground
his moaning blending with the sounds
of cannon fire, artillery,
of shouting coming through the trees.
His thoughts turned inward to his home
back to the girl he left behind
he wondered if she’d ever read
the letter folded in his pocket;
but in the end, he'd stood his ground
that no man should be shackle-bound.

The trench lay deep, the stench was rife
the smell was worse than rotting fish—
of death, decay and spoiled meat,
of wounded holding onto life.
The damp chill cut them to the bone
it seemed there was no end in sight
but for a moment, time stood still,
as song arose this Christmas morn.
Out on the field, the firing ceased
as both sides lay their weapons down,
they shared the images of home
with differences now set aside
inside this momentary peace.

Flying low and taking flak
the bomber flew a steady course
another mission lay ahead…
while Red Tails flew as his escort.
As Mustangs chased the Messerschmitts
the bombardier searched for his mark—
the target bridge lay in his sites
he opened bay, released the load
then turned the plane to take it home.
Few casualties were lost this run
their mission for the day complete
still many more would lie ahead,
till enemy would take defeat.

Deep in the jungle far from home
they hacked their way through undergrowth
so thick that they could barely see.
Their wet clothes clung to them like glue,
while searching for the enemy.
With every yard that these troops gained
another skirmish would ensue.
The bloodshed reigned on nightly news
while protestors took to the streets—
and politicians played their part
claiming that they could defeat
the enemy on their own turf.
How could they justify the cost
of all the sons that would be lost?

The arid lands were dry and hot
with rocky hills and desert plains
and far beyond, the mountain range.
Against a new insurgency
our soldiers sent to do their job
to keep this enemy at bay,
to find some kind of lasting peace.
Out on the road the humvee stops,
a man steps out to scan the land…
the sniper waits and takes the shot,
another soldier’s life is claimed.
Another wartime casualty
the flag draped coffin boards the plane,
returning home to family,
while duty-bound, his troops remain.

The never-ending battle roars
right side, wrong side, enemies…
yet all these folks were somebody’s
brother, sister, husband, friend.
As long as we remember them,
keep their memory, say their name
not just one day, but every day
if in our hearts they still remain,
their lives were never lost in vain. 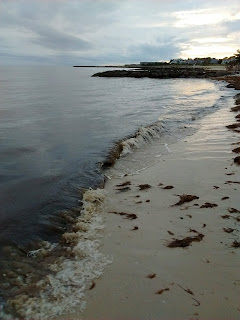 We must rise above the violence of late,
return to the peace we once knew
while turning our backs to the anger and hate.

Too long we’ve left destiny in hands of fate
now the world’s upside-down and  askew—
we must rise above all the violence of late.

And shelter ourselves from the thoughts that negate
as we keep open minds to the truth
while turning our backs to the anger and hate.

Disparager’s words paralyze; suffocate,
and ignorance needs no excuse—
we must rise above the violence of late.

The angry man bellows with words that berate
yet we can stand firm and refuse,
while turning our backs to the anger and hate.

Fear breeds more fear, but love liberates
and we are so long overdue…
we must rise above the violence of late
while turning our backs to the anger and hate.

Image by Author. Near Harwichport,  Cape Cod MA 2016
Posted by Ginny Brannan at 12:39 PM No comments: