In the Shadow of the Night King

From heated debates venting so much hate,
temperatures rise; before our eyes
a storm rolls in; we’re at the beginning
of bigger things. Who could have imagined
this turn of the tides: whitewater churning—
every day now spent “unlearning”
the truth as we knew it? History shows that
we’ve been here before…hard to ignore
how it repeats, how it depletes our energy.
Once more drained, the power remains—
with whom you say? On any given day
we’re being slammed, completely hammered
with lies and innuendo. Who has the truth?
It’s been lost at a cost we cannot grasp.
When shit starts at the top and rolls downhill
the mirrors go up to reflect the swill
that we’ve become. It isn’t pretty…
When we ourselves get caught in the heat
then Evil Incarnate’s plan is complete
Ever further from middle ground
we wait for the “other side” to fall down.
When common sense itself rescinds
we divide to be conquered from within.
Brother to brother, friend to friend
that’s how a civil war begins.
Have we been played from beginning to end?
The climate is changing as leadership wanes
no respect in the masses, no political gains
stagnant, repugnant, recalcitrant too
how sad, indeed… What can we do?
No strong enough leader to rally behind
would it be surprising to see an uprising?
With daily inciting the Devil’s enticing us;
will we be caught up in his little game?
When every day promises more of the same.
We’ve stepped back into the Twilight Zone
where blatant hatred thought unknown
marches in the streets again—
everyone loses, no on wins.
So “savvy up” people, look around
only we can make the change that’s needed.
We see the writing on the wall,
how long before the warning’s heeded? 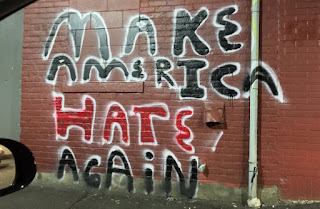 Posted by Ginny Brannan at 11:50 AM No comments: 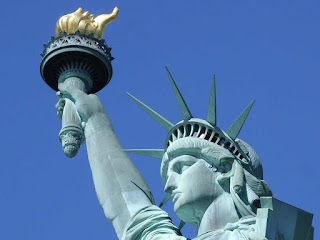 We are the tired, the poor
at one time elevated
now we’re denigrated;
we watch the “disillusionist”
slam our front door.
Where are the promises
that called to our elders
who risked life and limb
to come to this shore?
Who raised up their families
despite any hardship,
now find they are ‘pink-slipped’
and welcome no more.

She stands in the harbor, where some call her ‘Lady’
yet others are known to have called her a “whore”
this symbol of “Liberty“ who welcomes the masses,
this emblem of all who have come here before.
Hold high your lamp, oh, Symbol of Freedom!
Call out the losers, and those who’d abhor…
Remind them our strength is not just in numbers
but in our allegiance for all we stand for!
Remind us stand tall, and help the afflicted
ravaged by hunger, by thirst, or by war.
Help us remember that we are their beacons;
and that trust only comes when you build a rapport.
Just like all families, sometimes we bicker,
yet when push comes to shove we are hard to ignore;
for we’re so much better when we stand together
diverse but united, our country endures.

In the Still of the Night


Over the fence what was once a garden
ten, twelve, fifteen years ago
has rendered itself unrecognizable;
a winding of undergrowth, an overgrown tangle
of weeds and vines, sumac and bittersweet.
The old owner of the land passed on long ago,
his tiny hoarder’s cottage left to a friend.
Uninhabited,  left as tinder to burn to the ground—
faulty wiring or arson for insurance­...we’ll never really know.
The sun has dipped now below the horizon,
dusk turns to darkness,  the former garden
takes on an other-worldly view—
shadow images of arms and hands
stretch out, reaching for the waning moon.
The soft rustle of leaves can be heard, interjected by
the crackle of a branch snapping now and again—
perhaps a skunk or some other wild denizen of the night,
but more than likely one of three feral cats whom
have adopted this yard and made it their home.
The sound of a passing shower, raindrops on tree tops
adds its whisper to the chorus
odors of wet leaves and dampened earth
come slipping through the screen.

There is a certain comfort
in the night sounds, a normalcy…
a sense of security;
counterbalancing the chaos
to erase the lunacy of the day,
I close my eyes now, and surrender
and to my dreams, now slip away.

* Quote from children's book, "Goodnight Moon" by Margaret Wise Brown
Posted by Ginny Brannan at 11:42 AM No comments:

Judging You, Judging Me 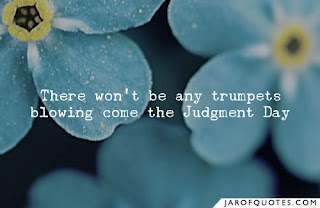 “We all judge. that’s our hobby.
Some people do arts and crafts. We judge.”
—Stanford, Sex and the City

I heard you say you have no vices,
and see that you’ve taken to judging others
on a sliding scale of perfection;
with no one quite as perfect as you.
You know all that there is to know
on a myriad of subjects
and a multitude of points.
Alcohol, tobacco, drugs…
the bane of the 'weak-minded,'
and anyone with such affliction
should rid themselves of their addiction.
How fast you counter with your opinion,
to expose such ‘weaknesses’ to your minions.

—God forbid you ever knew the anguish of abuse
the pain of infection that eats the bone
the torment that rips out  the heart
the invisible suffering that tears one apart.

I dare you to walk a mile
in the other person’s shoes—
yeah, that person whom you're sure
lit up that cigarette just to “spite” you;
the one you’ve deemed as thinking
“only of themselves”
polluting the air that’s there
for only you to breath
Perhaps they, like you, needed
a night out, a reprieve—
from the worries that they carry,
from a life you could never understand.
How hard it must be to keep up that image of the perfect man…
Don’t you see that they, too,  pull their pants on one leg at a time?
In another lifetime, you also might have been judged...
but we no longer talk of lifestyle choices
in once-hushed tones and whispered voices.

So best not judge lest you be judged...

We ALL have vices, some obvious
and some so subtle that even those affected
cannot see them for what they are.
Yet, if we take a good look in the mirror
we might realize —with some measure of shame—
inside all preconceived notions lies this truth:
we really are the same...
not one of us is perfect, no matter what we claim.
So, be careful where your laurels rest
and whom you would defame

*TY to C.B. for the perfect quote above, which I saw and remembered on your page from such a long, long time ago.

Posted by Ginny Brannan at 10:19 AM No comments: