With humble demeanor and thoughtful repose
he stands, unassuming, amid the great throng.
Foregoing attention, intent on his role,
he ponders each question, words carefully chose
to impact precisely; to reach and console.

Rarely indeed does a man come along
who inspires to listen, to look our hearts
when blinded by struggles and losing our faith.
Who’s able to touch the crux of our souls,
reminding us all how our lives interlace.

We try to absorb what his wisdom imparts—
our spirits are moved, inexplicably so.
He lacks any pretense,  and yet tour de force
pries our souls open; we let down our guard…
he sets by example, his words reinforce.

Our paths may not cross in this lifetime of ours
but yet his words echo inside of each still…
to strive to be better, to never lose hope;
when problems consume and our taste for life sours,
and ills take us down and we’re left feeling broke;
when into the darkest abyss we are thrown
we’re called to remember: we’re never alone. 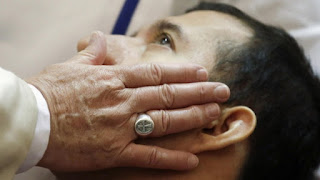 Watching the Pope visiting the U.S. last week, was taken by his serene demeanor, the way he would lean in to listen to the ones speaking to him. When he spoke, whether before Congress, or before the masses, his message was one of caring—for the earth, for each other. A gentle reminder for all of us to do better, to be better than who we are. 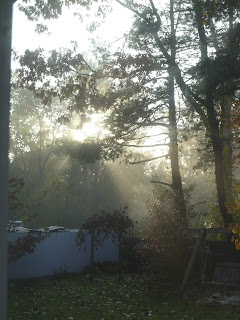 Seceding from the sleeping limb,
across the roads and pathways skim...
exiled from the copse once dense,
brief refuge found on rusted fence.
Upon the lawn to scourge the rake,
bright colors paint the pond and lake.
Stripped of season’s finery,
stark and barren stands the tree.