Where Have All the 'White Hats" Gone? 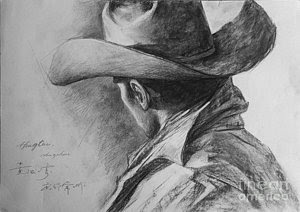 What happened to all the heroes of old?
The ones that wore white hats ‘n rode
straight into the fray. Strong and bold,
they walked with swagger, spoke their mind,
lived life with conviction. You would find
they didn’t spew words for the sake of spewin’
nor pump themselves up to be more than they were.
They knew right from wrong; quiet and strong…yet
when push came to shove, they would stand and defend
the helpless, defenseless; both stranger and friend.

Where have all the ‘white hats’ gone?
At the end of the day the world has turned gray.
We’ve misplaced ability to ride tall it seems,
caught in a darkness that destroys all our dreams.
As once true grit spins its downward spiral
we curry resolve for our own survival.

Another One for the Books...

Living in a valley between two mountains
sound amplifies a hundredfold…
You hear train whistles wailing down the track
long before you ever see the lead engine.
Thunder echoes on forever. And lightening?
Lightening illuminates the whole valley
silhouetting the mountains on both sides
reflecting in the river that divides the two states.
As a child, living here in this town where
Vermont and New Hampshire are interchangeable
I always thought we have the best of both states.
The Connecticut River divides us, but there are bridges—
two in our town, one a few miles to the south,
another twelve or so miles to the north.
Business is conducted on both sides of the river;
family and friends may reside, or work, on either side.

The townsfolk on my side, the Vermont side, have made
their exodus down to the riverbank this fine summer's eve.
Chairs line the sidewalks along Rockingham and Atkinson Streets,
the parking lots at IGA and the gas station across the way
are filling up with even more of these ‘children of all ages.’
The parking lot of the Dari-Joy—known to the locals as "Joe's"—
is filled to capacity. The yellow neon lights attract all variety of
moths, mosquitoes and other insects— just part of the atmosphere
on this warm July night. Hard to tell who is in line for ice cream
or just milling about before the show, but one thing for sure,
Joe's is doing one heck of a business tonight!
We take our prospective places along the wooden rail
at the top of the bank, eyes focused on the hill across the river.
We cannot see the school on the upper level across the way,
but as we watch, the first trail of light goes up and bursts into
a waterfall of fire! It lights up the sky, then a quick flash, and—

…the sound ricochets off the mountains and down the valley.
It is followed by another… and another…
Occasionally a loud whistle replaces the boom
and lingers—seemingly to infinity.
Down the way a baby cries, excited children laugh and cover their ears,
parents and the older folk comparing this display to those of years gone by.
The sprays of fire reflect upon the water; smoke lays heavy in the air,
smell of sulfur drifts downhill and across the river.
We watch as trails of fire are sent skyward one by one,
“ooohing” and “ahhhing” after each colorful explosion.
Suddenly five trails go up at once, followed by five more,
and five more…the Grand Finale!!
The flashes fill the sky, the sound is deafening!!
Surely they must be hearing this in Springfield and Charlestown
to our north, or in Westminster and Putney to our south.

Spontaneous cheers, whistles and clapping erupt from the crowds.
Another 4th of July is on the books, and we declare it the best one ever
…until next year!
© Ginny Brannan 2016


Childhood memories of growing up in a small Vermont village on the Connecticut River….
The image above is looking downriver (south) from the Vermont side toward the village of Bellows Falls.  The bright lights to the right is the Dari Joy, forever "Joes" to me…and beyond that the gas station, the IGA (no longer, now a different business there) and further down the street, our downtown area. The mountain to the left is Fall Mountain on the N.H. side. Our own hills are behind to the right of us in this photo. When I was a child there was a beautiful Arch Bridge spanning the river. Deemed unsafe, it was replaced with the plain single span seen here. People would (and still do) line the river bank to see the fireworks displays. Back then they were shot from behind the school on the hill in North Walpole.No longer on the 4th now, they are done for Old Home Days on the first Saturday in August, and are much larger, the more vivid 'Gucci' kind, shot closer to the river. I still hold on to the memories of wonderful childhood 4th's though!

Many thanks to Lori Larue for allowing me to share this beautiful night image of my "hometown" in Vermont!!
Posted by Ginny Brannan at 8:04 AM 1 comment:

Ever transforming
stronger than you first perceive
I am ‘dragonfly’

What is it about the dragonfly
that attracts me…
As a children we were told
they were “darning needles”
would “sew your mouth shut”
…we ran in fear of them.

Throughout my life
I have adapted and transformed:
transparent, translucent
I wear my heart on the outside.
I may appear stationary,
but am always moving,
discovering, growing;
like the dragonfly,
becoming who
I am meant
to be.

As a seasonal symbol in Japan, the dragonfly is associated with autumn. More generally, dragonflies are symbols of courage, strength, and happiness, and they often appear in art and literature, especially Haiku. Wikipedia, the Free Encyclopedia


I like to believe that my “spirit” animal is a dragonfly. I am definitely drawn to these creatures. The dragonfly, with protruding eyes and exoskeleton, is not nearly as pretty as his butterfly cousin, though in their lifetime both metamorphose, adapting, becoming something else.  I’ve learned that even youth, the dragonfly nymph faces adversity, and must learn to swim the currents to survive. Their delicate, translucent wings disguise their real strength. In this stage of my life, more autumn than summer, I too have changed— writing poetry, finding my voice, and in the past year have discovered a courage and inner-strength strength I did not know I possessed…yes, I am drawn to dragonflies…
Posted by Ginny Brannan at 10:40 PM 8 comments: